BRNO DAM BEACHES AND OTHER ATTRACTIVE PLACES ON THE SHORE

The Brno Dam (major water reservoir) is a major recreational area in the city of Brno and the entire South Moravian region. Since its establishment in the 1940s, it has turned into a popular place to relax, do sports, walks and hikes. Swimming was restricted during the summer months after issues arose with blue algae. The reservoir was cleaned up and other preventive measures were taken along the shores of the river Svratka. Now everything seems to have turned out idyllically! You can now not only swim in the dam lake during the whole season, but also do lots of water sports.

The boat landing place is the gateway to the Brno Dam. Situated in close proximity to the tram and bus stops of Brno public transportation, it offers a large parking area and many stands with refreshments and restaurants. It is also the symbolic place to make the decision of whether to go on the right or left shore of the Brno dam lake.

If you take the right shore, the first beach you hit is the Sokolák beach. The Maximus Resort Hotel is situated right next to this beach and underlines the qualifies of the Sokolák beach with its wide array of dining, entertainment and relaxation.

The Sokolské beach lies on moderate grass-covered slopes with full-grown trees. It offers a pleasant park climate and the beaches are not crowded here. This place has become a landmark as a sports centre. It is one of the biggest and most beautiful beach volleyball sites in the Czech Republic with volleyball master tournaments taking place every year.

The name “Sokolák” comes from the sports and recreational site built up by the Sokol sports association after World War II. What is especially interesting about the Sokolák beach is the swimming pool. For 50 years, it was not used for swimming but rather as an aquarium or “botanical laboratory” covered with vegetation where protected and extremely rare plant species were grown. Soon after completion, the swimming pool stopped fulfilling this function due to poor water inflow and low water temperature (it was fed by a local creek)

The pool was covered by soil to a large degree some years ago and now there is a playground on top of it. A diving tower stood here for many years, but following frequent accidents it was removed by the end of the 1980s.


If you follow the nudist philosophy and enjoy nude sunbathing at a sufficient, discrete distance from Sokolák, then the beautiful grass nudist beach and refreshments at Občerstvení u Halivše are the right place for you.

Behind the Osada nudist beach you will mostly find only completely private or non-public beaches. The landscape behind the U Šuláka restaurant rises steeply and changes into rocky shores. This place is popular for adrenaline bike rides. The wilder part of the cycling track connects to the bridge by the Veveří castle. From here you can run up to the Veveří castle view tower or continue along the predominantly flat terrain up to Veverská Bítýška.

Directions: by steamboat from the Cyklistická stop, Veveří castle (4th stop from the Přístaviště stop), by car on the other shore and on foot over the foot bridge, by bike, on foot

FOOTBRIDGE UNDER THE CASTLE

Completed in September 2003, this footbridge is 100 m long and is intended for pedestrians and cyclists. This new landmark connects the two shores of the water reservoir under the Veveří castle. The bridge opened new possibilities for tourist trails and cycling tracks through the Podkomorské Lesy woods. There had always been a bridge under the Veveří castle – the first reinforced concrete bridge was built as part of the Brno Dam construction in 1940. However, in April 1945 it was destroyed by the retreating Germany army. Let’s now cross the bridge to the other shore of the Brno Dam.

The Veveří castle towers over a steep piece of land overlooking the Brno Dam. Until recently, it 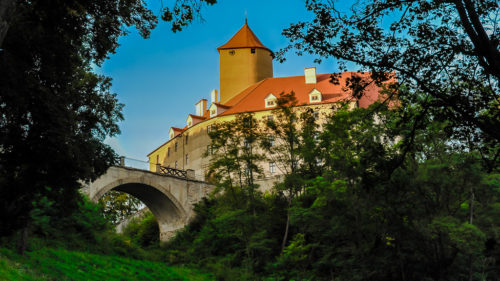 was one of the most heavily destroyed castle compounds in the Czech Republic. Its history dates back almost 800 years and is fascinating even by current standards. We don’t know where and how the story of the Veveří castle started.  Štěpán of Veveří was the first owner of the castle. Then the castle was held by a series of Moravian lords and also besieged by the Swedish army. In more recent history it was the local control point of the Wehrmacht and SS units. The occupation by Nazi units has been the source of many legends, stories, gossip and “mysteries” about certain weapons and documents supposedly left by the retreating soldiers. But the castle offers more than what you’ll find in history books. The best way to see the castle’s awe-inspiring presence is to come and visit it.

Directions: by steamboat to Hrad Veveří stop, by car, by bike, on foot

We continue our virtual tour from the Veveří castle on the western (left) shore of the Brno Dam. The Game Park (Obora) is our first stop. What you will find here is a rather shabby recreational centre and auto camp, but very nice grass beaches.

Directions: by car, by steam boat, by bike, on foot


This is a very romantic place where the cleanest water from the lake is concentrated. There are many full-grown trees on the grass beaches and the access to the water is quite flat and easy. When the water level is low, a sand beach is exposed and an island with a hydrological rod protrudes in the middle. In the high season numerous mobile stands with refreshments pop up. Your children will certainly appreciate the corners with climbing frames.

Directions: by car, by boat (barrier-free access), public transportation, by bike, on foot

U KOTVY (WHERE THE ANCHOR LIES)


When it was completed in 2004, the new U Kotvy landing place allowed improved crossing of steamboats on the dam lake between Sokolák beach and Osada beach. The shore is very soft in these areas, which is why the bridge reached so far into the dam lake. The U Kotvy restaurant offers an outdoor terrace with a small grass beach and very easy access to the water.

Directions: by car, by boat (barrier-free access), public transportation, by bike, on foot

The Kozí Horka beach lies on the western (left) shore of the Brno Dam about 1 km from Rakovec and close to the yacht landing place. The beaches on Kozí Horka are grassy and the access to the water is flat. Sandy beaches are exposed when the water level drops. This may be the reason why this beach is the most popular one. The high level of convenience for families with children is certainly a benefit. You will find diverse stands with refreshments and sanitary facilities in the high season. Besides a large summer cottage area, also water clubs, the sea yachting association and rental of boats and pedal boats is based here. Until 1987 an open-air cinema was located on Kozí Horka and visited by people from Brno and beyond.

Directions: by car, by steamboat, by bike, on foot

Parking: along the road

Rakovec is the most southern part of the Brno Dam. In the past Rakovec used to be a very popular social centre by the lake, but later the 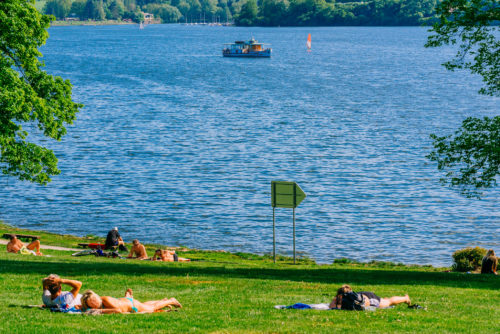 social activities shifted towards the boat-landing place where the bus and tram terminate. The beaches in Rakovec are frequented in the summer. The predominantly grassy beaches offer occasional trees, providing shelter from the burning sun. In the high season there are sanitary facilities and stands with refreshments. Children will enjoy the climbing frames, sand playgrounds and ping-pong tables. And from Rakovec it is only a short way to the hustle and bustle of the Brno Dam: Přístaviště.

Our virtual tour and walk around the shores and beaches of the Brno Dam Lake ends here. We firmly hope our tour has left you with inspiration for trips and walks or has simply awoken a desire to rest on the beach. We would be pleased if our Maximus Resort site were among your frequent destinations.

Up
We use cookies on our website to give you the most relevant experience by remembering your preferences and repeat visits. By clicking “Accept All”, you consent to the use of ALL the cookies. However, you may visit "Cookie Settings" to provide a controlled consent.

This website uses cookies to improve your experience while you navigate through the website. Out of these, the cookies that are categorized as necessary are stored on your browser as they are essential for the working of basic functionalities of the website. We also use third-party cookies that help us analyze and understand how you use this website. These cookies will be stored in your browser only with your consent. You also have the option to opt-out of these cookies. But opting out of some of these cookies may affect your browsing experience.
Necessary Always Enabled
Necessary cookies are absolutely essential for the website to function properly. These cookies ensure basic functionalities and security features of the website, anonymously.
Analytics
Analytical cookies are used to understand how visitors interact with the website. These cookies help provide information on metrics the number of visitors, bounce rate, traffic source, etc.
Functional
Functional cookies help to perform certain functionalities like sharing the content of the website on social media platforms, collect feedbacks, and other third-party features.
SAVE & ACCEPT
Powered by